All aboard "Trevor"
yes, after a good night's sleep we were up early (brrrrr ... 3 degrees) for our
Sunrise Camel Tour.
After some basic instructions, we climbed onto "Trevor",
our camel for the next hour.  After walking for a little while we came up a rise to look across to Uluru just as the sun rose. 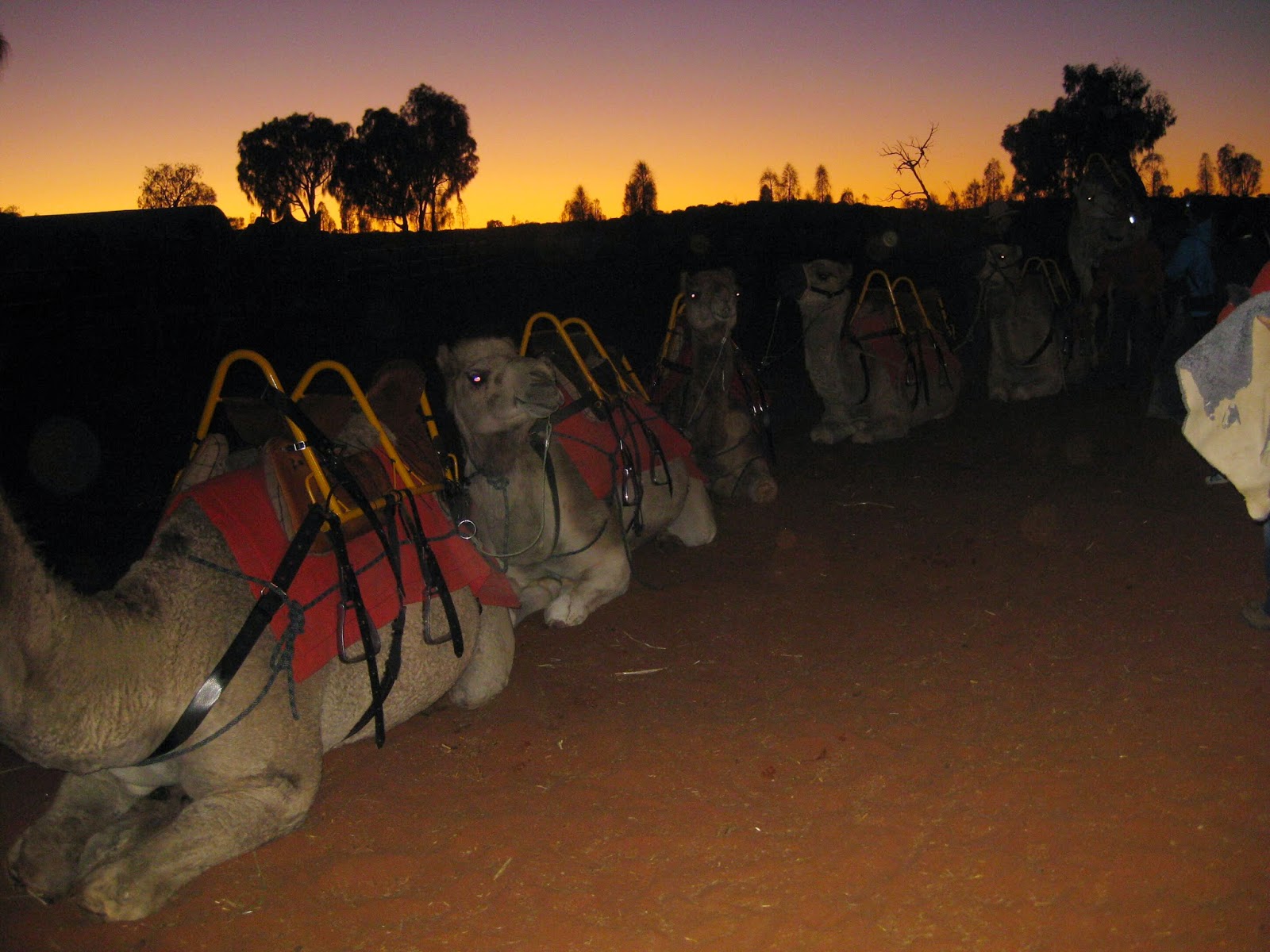 Our camel train
Our cameleers were very informative and obviously love their job.
A little further on, Kata Jtuta (The Olgas) came into view. 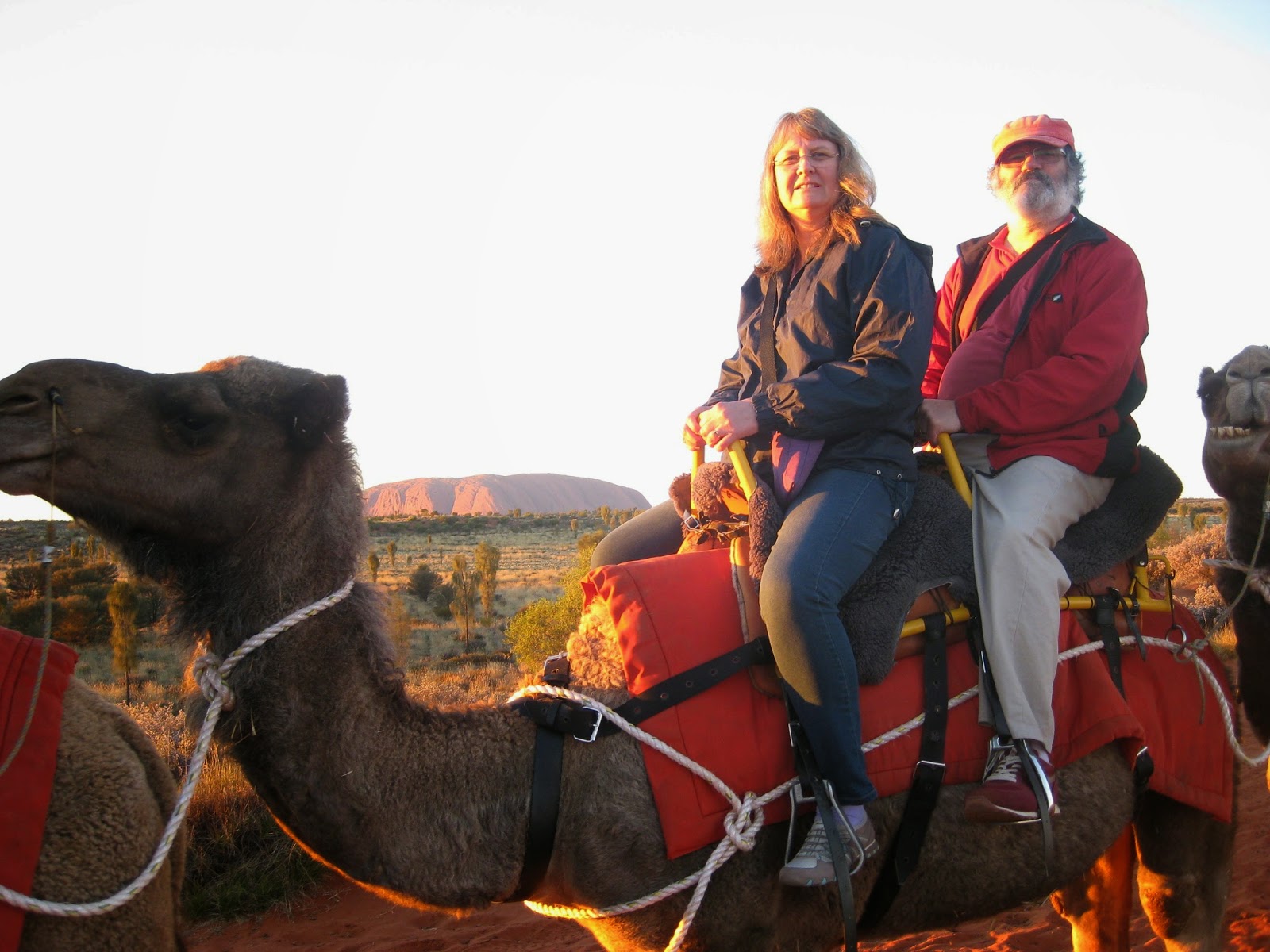 "Trevor"
A very welcome hot cuppa and freshly baked beer bread was awaiting us on our return.  Not only were my hands frozen, but so were my toes.  We then met two baby camels who were orphaned and were being looked after until they were old enough to be released back into the wild.
"Milkshake" was so lovely and soft and kept licking my hands that must have had a bit of jam or honey left on them from the beer bread.  She was like a big puppy! 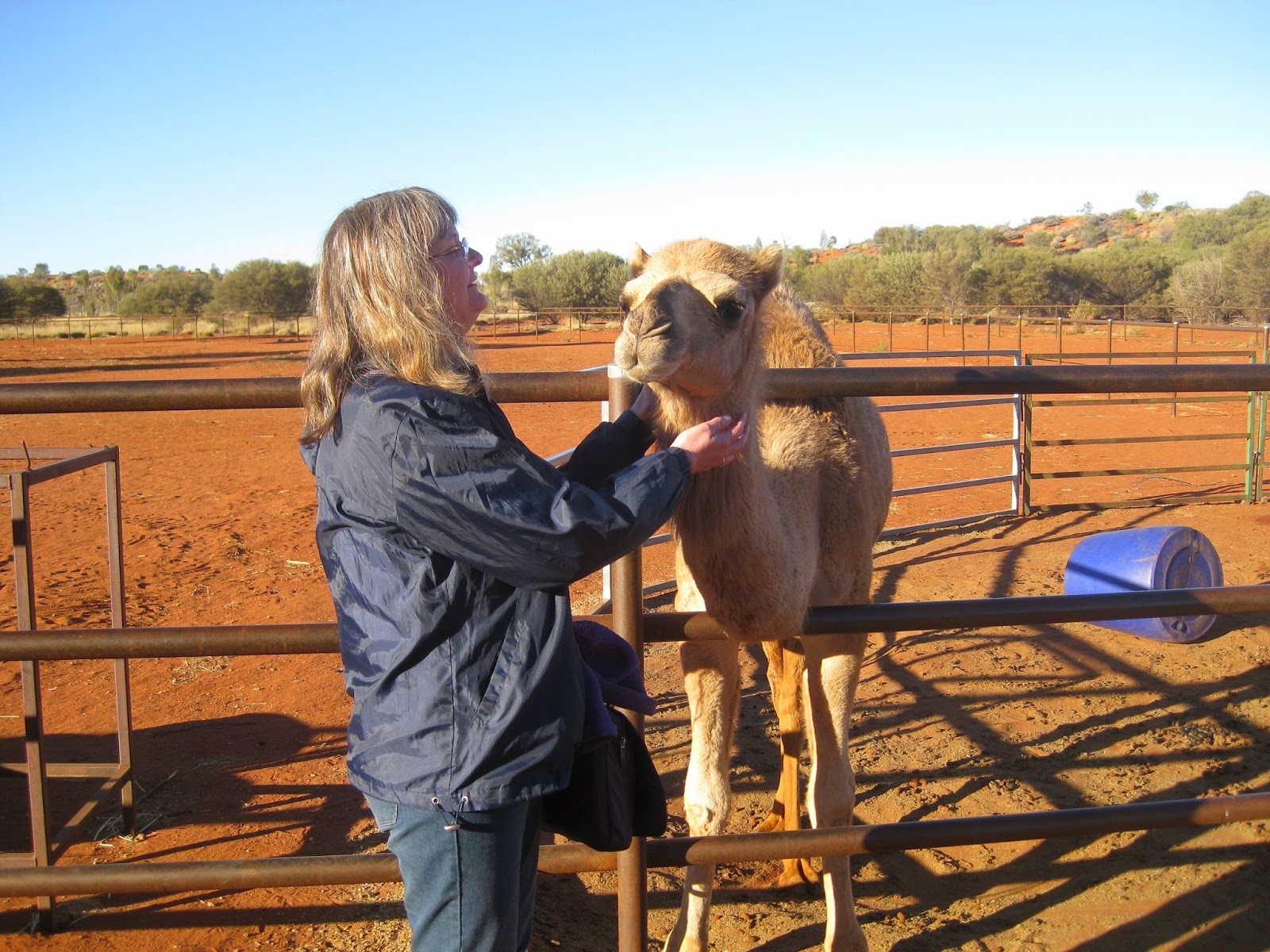 The remainder of our day was free so we went exploring the Resort where we were staying.  The resort is made up of different accommodation :
"Sails in the Desert" (very expensive)
"Desert Gardens" (less expensive & where we stayed)
the "camping ground" (cheap - tents or vans)
"Pioneer Way" (budget rooms)

All the different accommodations are located along the same road that circles around.  It is very easy walking or if you prefer a shuttle bus goes around every 15 minutes.

While walking through "Sails in the Desert" we came across a
'Sturt's Desert Pea' growing in the garden.  I've never seen one growing before and it was quite spectacular.  My only surprise was that it is a ground cover and I expected something taller. 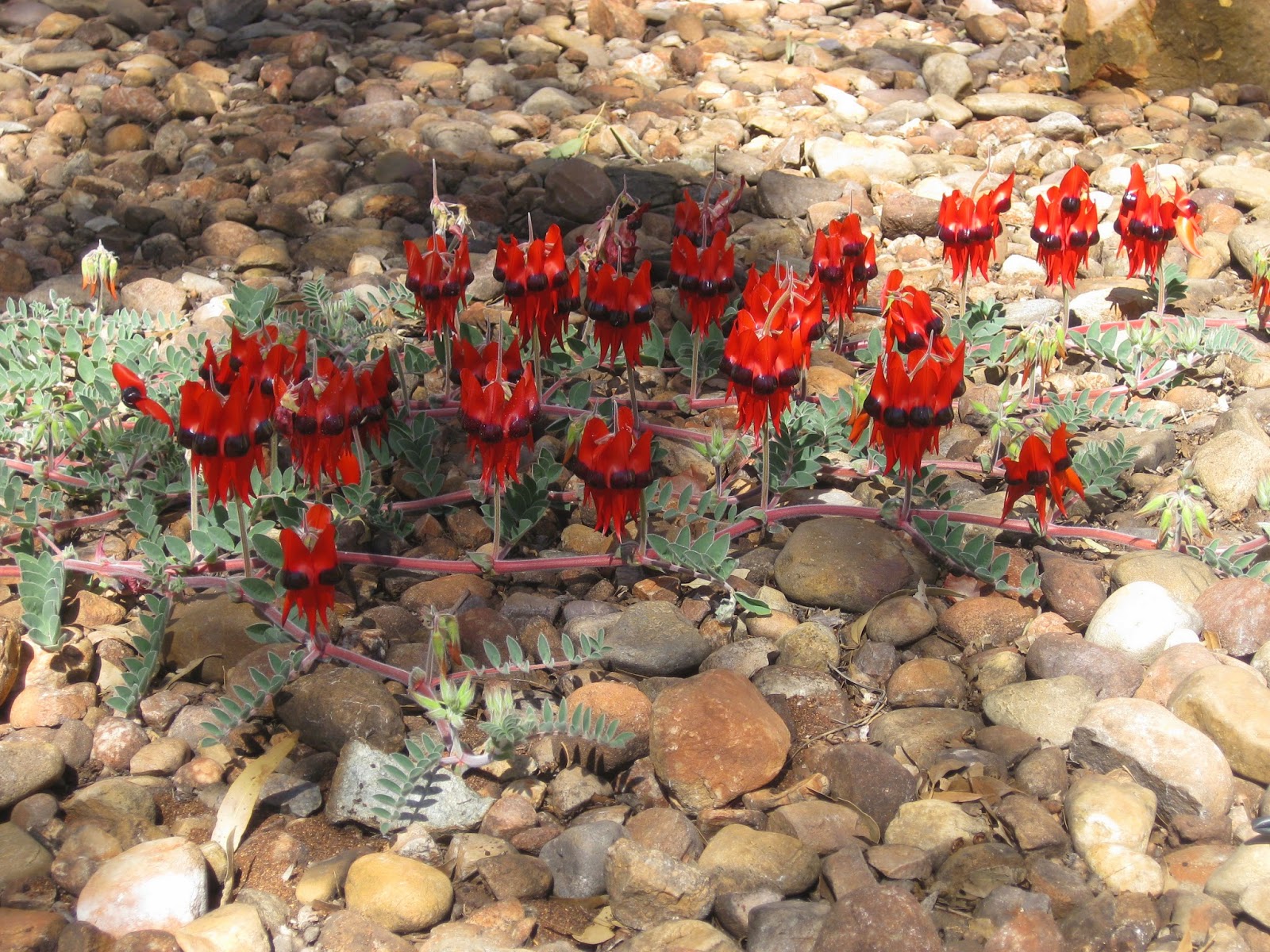 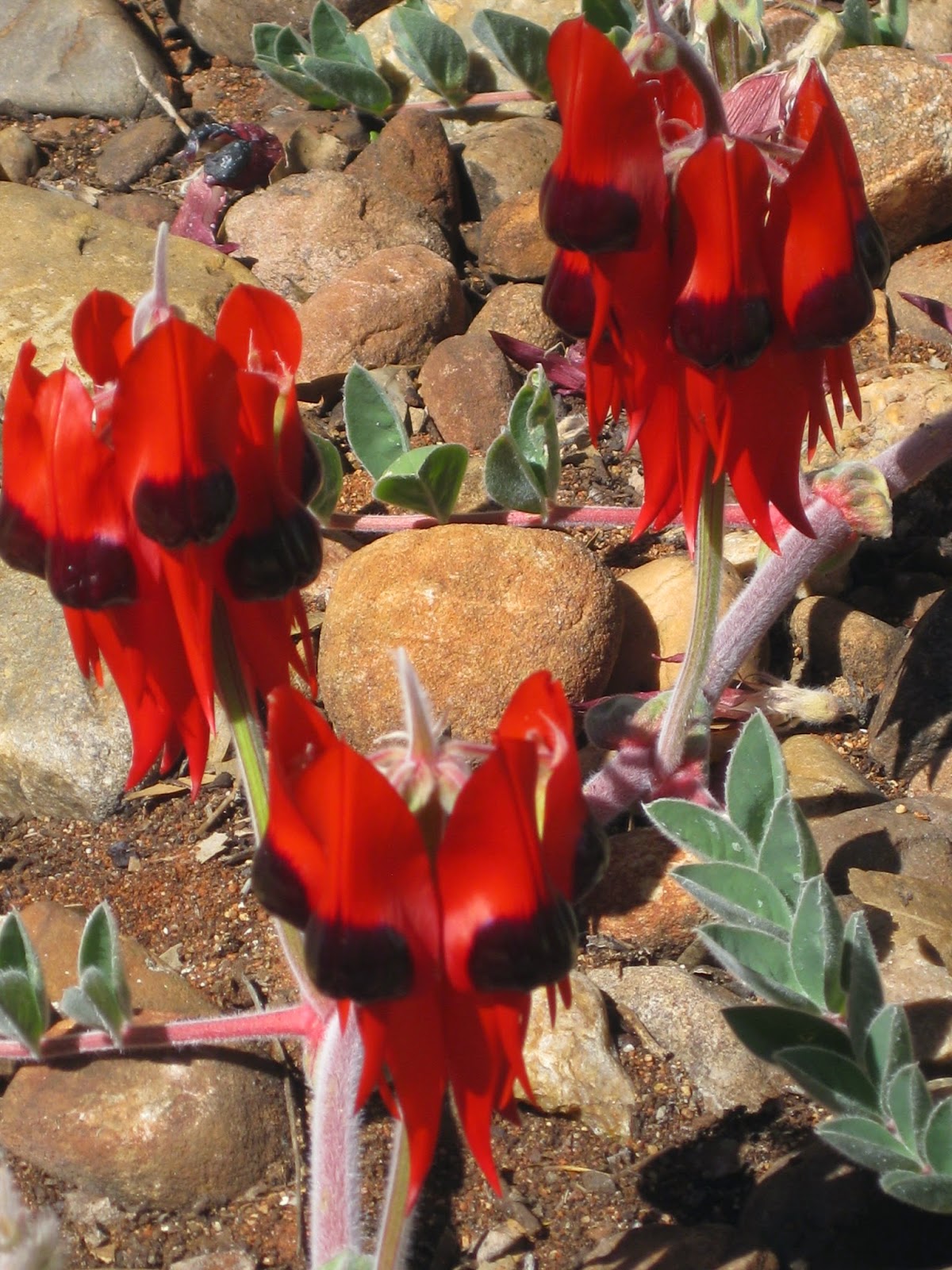 After a relaxing day, we were picked up at 5.20pm for our "Sounds of Silence" dinner.  This started off with champagne and nibblies while watching the sun set on Uluru.  We were then led along a path where a number of tables were laid for dinner - very nice!! 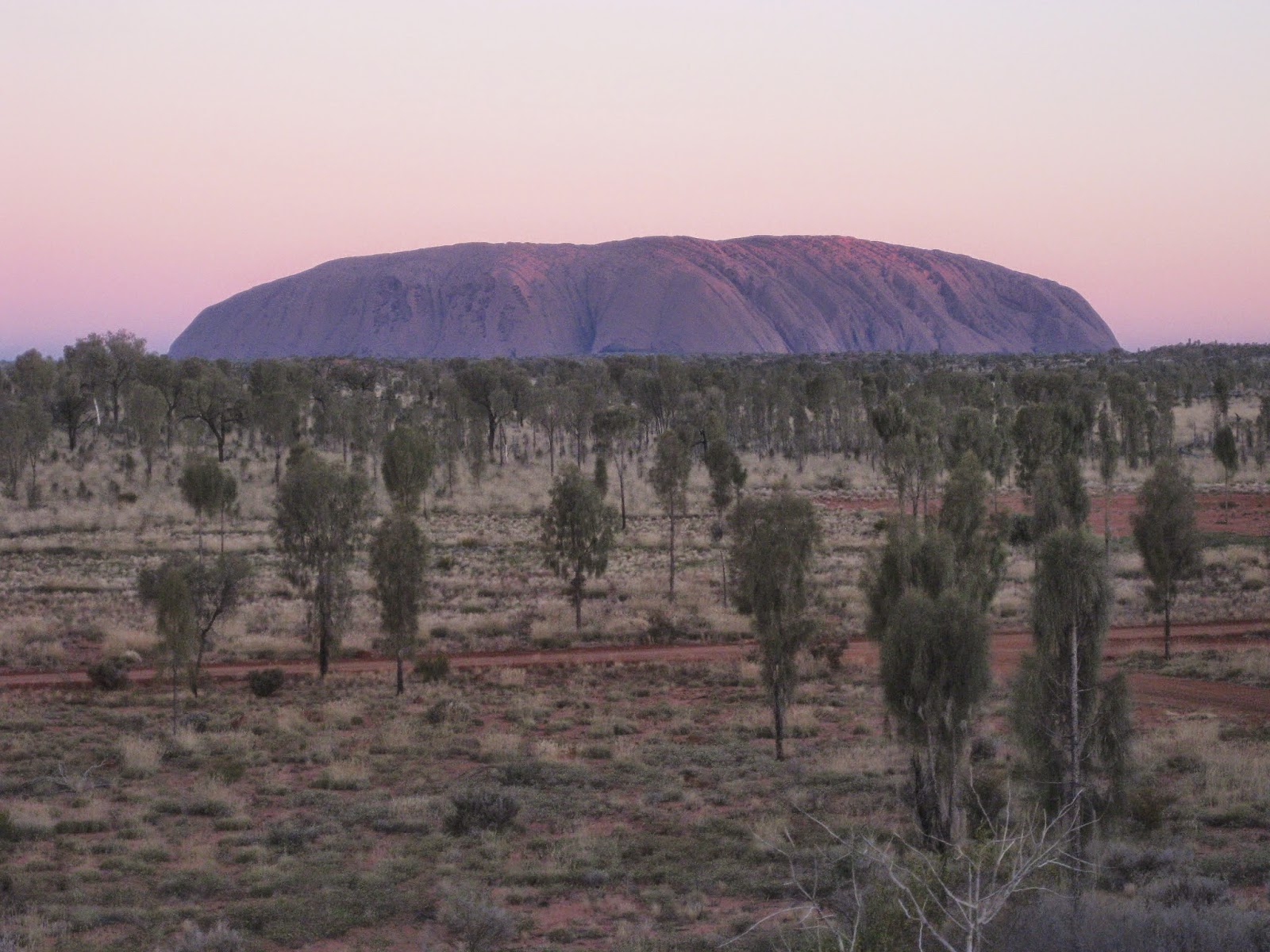 We were the 'locals' at our table, as the other people consisted of a young couple on their honeymoon from the USA, a family of four from France and two ladies from Italy.
We were waited on by very attentive waiters,  the food was very yummy, and consisted of crocodile and kangaroo (I tried a little bit of each) along with chicken, lamb & fish,
and a variety of salads and vegetables.

While we ate our main course, we were entertained by some aboriginal dancers and another playing the didgeridoo.

After our main course, we had an astronomy/astrology talk which was quite interesting, and because we were in the middle of nowhere and absolute darkness, the stars were just so bright AND we could see the Milky Way all the way from one horizon to the other - just brilliant!!!

We then finished dinner with dessert, coffee & port,
and then returned to our resort.

This was a really lovely night and we were so glad we had done it.

The following morning was an even earlier start as we set off on our Uluru Sunrise Walk.  It was very brisk as we stood on the viewing platform waiting for the first rays of sun to touch the contours of the rock.  Soon we were back on the coach heading to the base of the rock and our walk.  As we walked our guide told different Aboriginal stories that have been handed down for many generations. 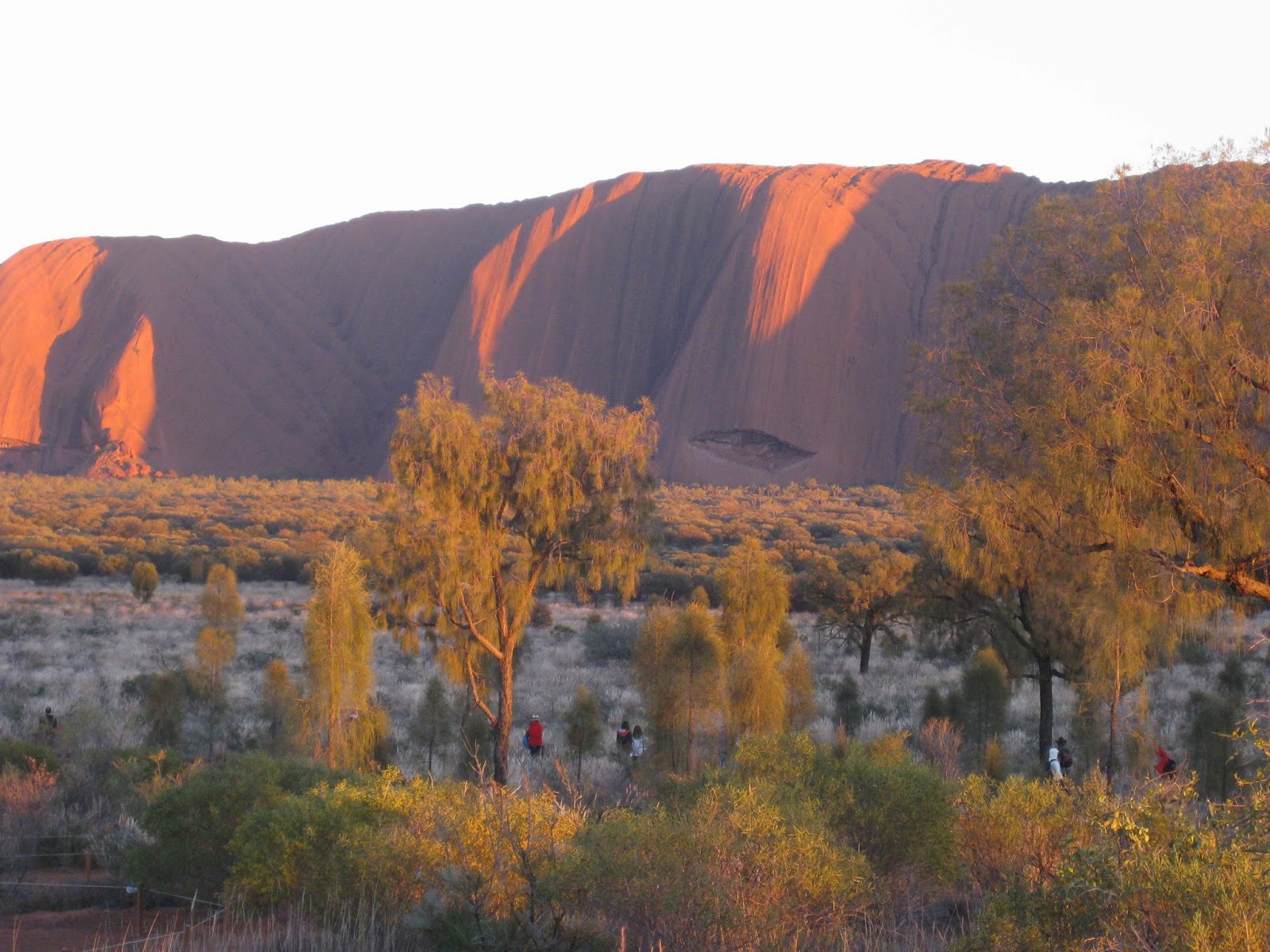 Uluru Sunrise
We were then taken to a Cultural Centre and then continued on for another walk on the other side of Uluru.  It is still possible to climb the rock but it is very high and steep in parts and the only thing to aid you as you climb is a chain - no thank you! 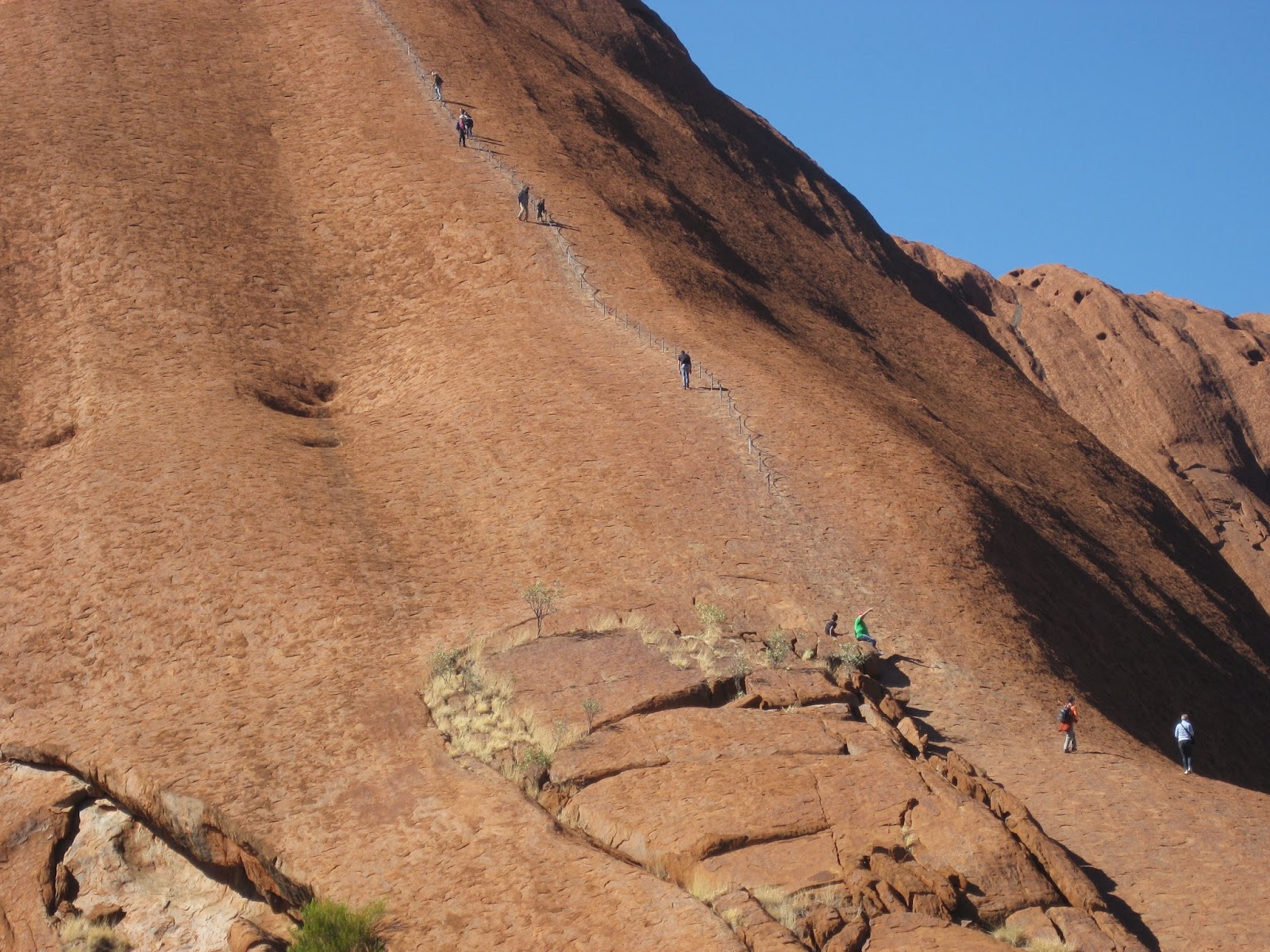 Our next encounter with Uluru was later in the day when we returned for a Sunset Tour.  Again we were treated to champagne and nibblies as we waited and watched the colours change as the sun went down.  Once the sun is gone, it is not long until darkness descends.