"Under the Big Top" Interactive Cards

This class was presented by Jane Clark who is Technical Editor of Australian Cardmaking Stamping & Papercraft magazine, and was sponsored by Stampin' Up!.  We were each given a pack of  Big Top Birthday DSP, wood mount Under the Big Top stamp set, a couple of sheets of A4 cardstock, templates to cut out the shapes for the 'stage' part of the cards, clearly written instruction sheets,  AND we got to keep everything we didn't use (which was most of it) and the stamp set (which I didn't own). Whoohoo, I love having left over goodies to take home!!!

The first card we made was "Leaping Lion" who is attached to a small piece of acetate and moves across the stage.  The mechanism is at the top, two punched circles with acetate sandwiched between and attached with a brad which is hidden by the star paper. 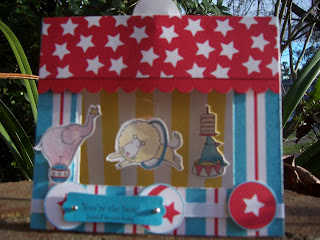 The second card was "Dancing Ballerinas", the mechansim is exactly the same as the first except it comes in from the side and is hidden by the 'curtains'. 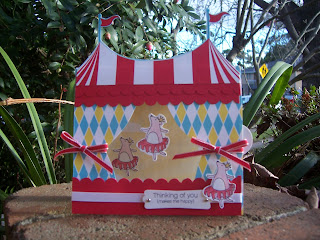 The 'big top'  is cut from the DSP in the pack, and to keep the flags from bending, there is a small piece of acetate behind them, cut to shape.

Both these cards were lots of fun to create and would be perfect to give to children (even us big kids have had lots of fun playing with them LOL).

I'll be back again soon to show some more of what we made in our Brisbane classes.

Have a crafty day!