Hi, it's me again,
this time to show what I made in the make'n'take
at the Stitches & Craft Show last week. 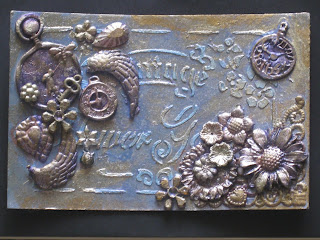 I've often admired this type of mixed media
so it was great being able to have a play without having a big outlay of products. 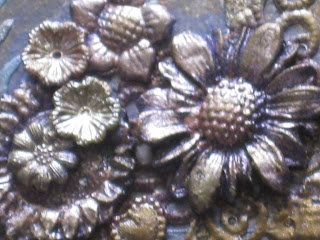 The base is a piece of chipboard,
and we used a stencil and paste which was fairly quick to dry.
Next we pushed black airdry clay into molds, which is quite easy
although initially I had too much overhang, so less is better. 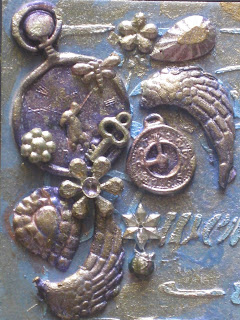 Once we'd finished using the airdry clay, we fossicked around in a big jar of findings,
then arranged all the pieces and glued them down.

Next we drybrushed Art Alchemy Acrylic Paint over the whole design
including the base card.  The colour I used was violet blue which was quite fascinating as when it went over the black it became violet, but over the base and the white paste, it became blue!
We then used a second colour to highlight different pieces, I think it was a champagne sort of colour, then to finish we used a bit of gilding wax.

What I like about make'n'takes and classes is that you get to try things out before spending up big.
Just the silicone molds for this were quite expensive but I'm sure I could get a similar look using bits'n'bobs from my evergrowing stash.

Looking back over the last couple of weeks, I've played with
paint pouring, japanese book binding and mixed media.
Lots of fun with each of them and something I would definitely like to play with more.