Hey there, I'm back in the land of Blog - woohoo!  My apologies for not blogging lately but life just gets in the way sometimes.  First it was my sojourn at Kaisercraft in Geelong (and no, I still haven't finished those projects yet, eeeek), then the following week #1 son went on a 3 day hike with Boys Brigade, walking the Six Foot Track, which starts at Katoomba and finishes at Jenolan Caves.  "Mum, do you think you could pick some of us up?" he asked a few weeks earlier.  "OK" says me, but it's a bit of a lonely road out to the caves, so I asked my BFF along for the trip.  So we had a leisurely drive to the mountains on the Tuesday, enjoyed a yummy lunch at Leura, stayed at Katoomba overnight, peered through thick fog the next morning (view? I'm sure there should be a view here somewhere!) before heading off to Jenolan Caves.  Oh, and "change of plans, Mum, we're now finishing at the camp site BEFORE  the caves".  We (BFF & me) could only hope we were waiting at about the right place - no signs, no phone reception, no hikers?  But all was well in the end with the parents of one of the other hikers figuring out where they were, phew! 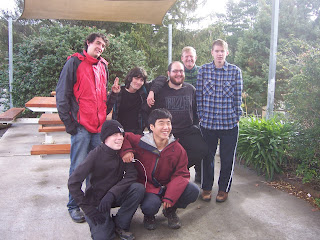 Weary, stiff, all in one piece & still smiling!

Anyhow, I have actually been doing a few bits 'n' pieces, so thought I'd show a card I made using the new Graphic 45 "Steampunk Spells" collection.  This is not my design but one I saw recently on the G45 blog and really liked, a card on a card. 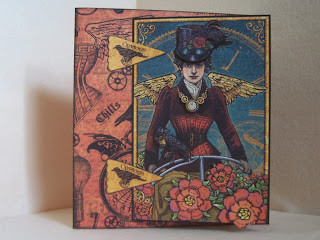 It's rather hard to see in the photo, but I've fussy cut a second layer of flowers, her hat, necklace and the raven (or is it a crow?), as well as a third layer for the flower centres, and popped them up on dimensionals ('Vintage Voyage').   The hinges are from a pack of 'push outs' (sorry, don't know what else to call them). 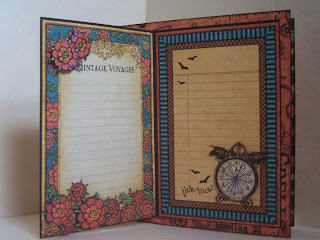 This is inside the 'front' card, again with extra flowers fussy cut and popped up, as well as the flying clock. 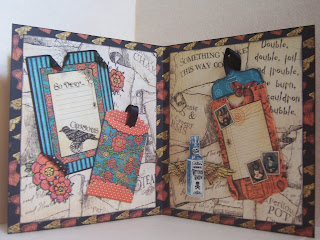 For the inside of the main card, the inserts are cut from 'Witching Hour', the torn panel from 'Frightful Folly', another couple of fussy cut flowers ('Fanciful Floral') and the tag envelope is again a 'push out' which is then folded.  Attached to the ribbon is a 'black cat' tag.   On the right side, the bottle is stamped using Distress Markers rather than an ink pad, to get the blue and black.  The wings were leftovers from the lady.  The other envelope is also a 'push out' with a tag which slides out (hence the ribbon pull).

I really liked the way this card went together, hmmm ....... may make another one!

So, there you have it, I'm up-to-date again.   Hopefully I'll be back again sooner rather than later !!!

Email ThisBlogThis!Share to TwitterShare to FacebookShare to Pinterest
Labels: Graphic 45