Today has been a beautiful winter's day,
but now the sun is setting and the evening is getting colder ..... brrrrr!

I thought I should catch up with some cards today,
some for swaps, some for birthdays
and some for orders. 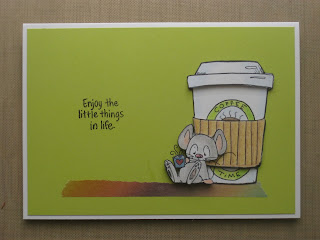 This cute little chap (who is getting drunk on coffee) is for a swap,
and hopefully the recipient will like it. 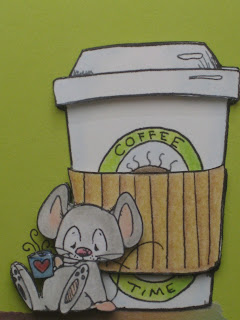 The image was stamped four times, the first three onto white cardstock
and the fourth directly onto the green card, which allows for the steam from the coffee mug.
Each of the three images on the white card were coloured identically with a variety of prismacolor pencils.

The first image was completely cut out; on the second image, the lid, the coffee band and the mouse were cut out.  On the third image, only the mouse was cut out. 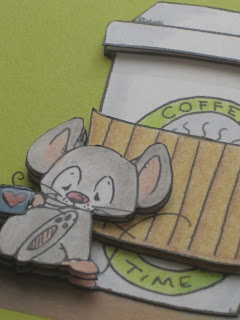 The first cut image was adhered directly onto the green card, lining up the images.
The second and third images were popped onto dimensionals for a 3D effect.

The coffee mug was given a glaze by adding a small amount of glossy accents
and allowed plenty of drying time.

A piece of rainbow washi tape was added to ground the image.

A quick little sentiment was added, the top was adhered to a white card base
and it was all finished!

Thank you for popping by to see what I've been up to;