Our mystery destination was "Melbourne" , cabin luggage only - so having packed a backpack each, we caught the train to the airport, checked in, and with plenty of time to spare, had a bite to eat for lunch.  The flight was uneventful, caught the skybus into Spencer St station, and picked up courtesy bus to our hotel, Crown Metropol.  Our room was on the 20th floor with terrific views across the city. 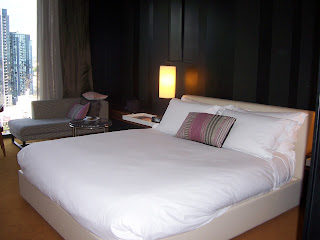 The rooms all had floor to ceiling windows, a king size bed and quite an interesting sort of open plan bathroom which you could close off with partitions. 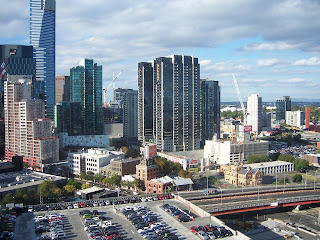 On Monday evening we went for a walk along the Yarra river, until we arrived at the restaurant that my DH had previously booked, a very nice french restaurant called 'Guillaume'.  The food was just 'mmmmmm' !!!  Afterwards we walked through the Crown complex back to our hotel.  I hadn't realised just how big the Crown complex is, with a casino, shops, 3 hotels and lots of restaurants and all are accessible without even going out onto the street!  No expense spared in this complex - very opulent!

On Tuesday morning we headed off to the free city tram.  They run both ways and come along every 10 minutes.  Unfortunately we picked the wrong direction as the tram was stopped by a 'police operation' in Docklands and could go no further.  So we walked and walked and walked and finally got to our destination,  Queen Victoria Markets.   Lots to look at here, stalls selling all sorts of things, and then further along fruit and vegs, and a meat/fish/deli section along with take-away food stands.

Off we went again back to the tram stop (by which time the trams were running properly again) and so we went round the whole loop before getting off at Federation Square. 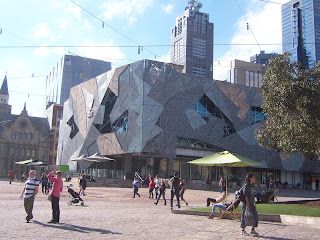 Lots of people here, as it is on the banks of the Yarra and opposite Flinder's Street station.  From here we crossed the Yarra and walked along Southbank, stopping for a gelato - delicious! 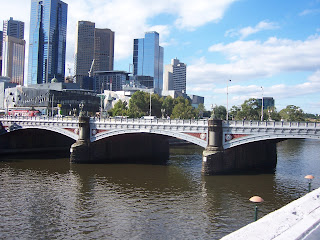 We slowly made our way back to the hotel to put our feet up for a while before heading out again around 5.30pm to another mystery spot.  Down the road to the tram stop where we hopped onto the St Kilda Beach tram.  I was totally mystified as to where we were going, but DH seemed to know.  Unbeknown to me, he had managed to win tickets to be in the audience of "rocKwiz", a program on SBS tv, and they were filming the second last of this season.  And although it was standing room only, it was such a fun night.  The new season goes to air later in May, so tune in to see what happened ?????

Wednesday morning after a leisurely breakfast, we checked out of our hotel, caught the free tram again and got off at Old Melbourne Gaol.  Included in the ticket, is a 1/2 hour tour of the Police Watch House.  This was an interesting experience, with the Seargent barking orders, women segregated from the men, and then let into the exercise yard.  All very primitive but used up until 1994 (I think) .  We then headed back into the gaol to continue looking around.  Each cell was so small with a tiny window high up.  The gaol is on 3 levels and in quite a number of the cells, there are interesting facts about various prisoners including the imfamous Ned Kelly, why they were there, and unfortunately a number of them were hanged - sometimes wrongly accused. 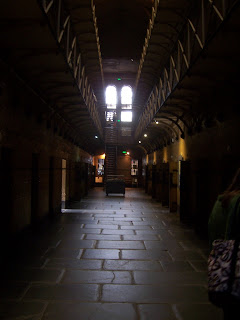 Leaving the gaol, we hopped back on the tram, alighting at Spencer Street with a short walk back to the skybus interchange and back to the airport for our flight home.

We had such a lovely break away albeit too short.  Thanks so much for my birthday surprise !!!