Phew!  Yesterday the city of Sydney and suburbs encountered the hottest day on record - officially, a whopping 45.8C in the city and 46.5C in Penrith.  Last night a very welcome southerly had blown up dropping the temperature by at least 20 degrees.  Today is cool and damp, natures airconditioning is lovely.  Unfortunately so much of Australia has been in the grip of terrible bush fires and the heat and wind has been playing havoc for all those fighting these awful fires.

Yesterday, my DS#2 decided to use his Bridge Climb voucher he had received for his 21st birthday last year.  The voucher is good for 1 year and it only had a couple more weeks before expiring, so although the forecast was for high temperatures, he and one of his mates headed off early to climb to the top of our famous landmark.  They both really enjoyed the experience and were just finishing their climb as the temperature soared.

I was having a play with my Dylusions again a couple of days ago, having bought another colour, only 3 more to go and I will have all 12 colours, although I know another 6 colours have just been released, along with some new Dylusion stamps and stencils, which should be coming soon to our stores  - I hope! 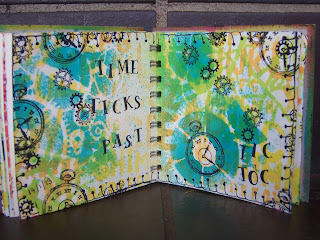 I was also playing with two new stencils on these pages, too.  One is an alphabet with a flower border, and the other is cogs and wheels, you know, clock bits. 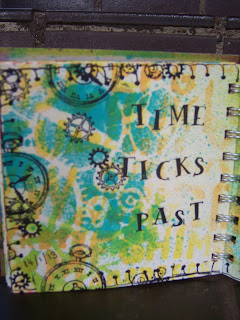 The stamps came from different sets, the clocks from Stampin' Up!, the border from Dylusions and the letters from my stash. 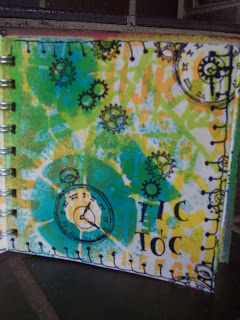 These two pages were really about playing with my new stencils and ink and randomly stamping and inking - love what you can create by just playing!

Today I've been catching up with making a couple of belated birthday cards and have just popped them in the post box.  Just as well birthdays last at least a month, hee hee!!!

Email ThisBlogThis!Share to TwitterShare to FacebookShare to Pinterest
Labels: Dylusions