Brrrrrr ......... it's back to winter today and this morning it was snowing in the Blue Mountains.  The photos I've seen look like a winter wonderland, and to think this time last week we were basking in 30 C + .  In Sydney it's been raining most of the day although at the moment the sun is out - crazy weather!!

Yesterday I got to get inky again at Jenni & Kerrie's Tim Holtz # 2 class.  This time around we were playing with Distress Inks, Alcohol Inks and Distress Markers with some really pretty results. 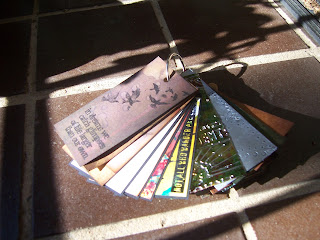 We used gloss card stock for the alcohol inks, drying with the heat tool between colours to stop them running and becoming muddy, then overstamping using black Archival Ink.  We also used alcohol inks on foil which had been run through a cuttlebug.  This was a really colourful result.

I think my favourite tag in this class was scribbling a small amount of metallic mixative onto a craft sheet, then scribbling alcohol inks next to it followed by blending solution.  Then put down gloss card and twist to mesh all the colours together.  I managed to get two tags out of this method and both looked quite different from each other. 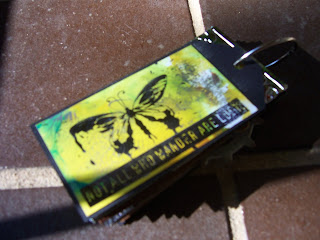 This one doesn't have quite as much colour as the first one, but I really liked the effect that the metallic mixative made, sort of a "fine root system" look.

Each tag has a sticker on the back with the method  included to refer to at a later date.

My BFF and I both bought alcohol inks when were in Brisbane back in June, after watching a demo, and I know Bev has used hers but mine are still in the bag - hmmmm I definately think it's time to bring them out and play some more.

Thanks Jenni & Kerrie for sharing Tim's techniques with everyone - you both ensured we all had lots of fun getting inky.  Oh, and to get the ink off your fingers really easily, soap your hands and grab yourself a Craft Scrubbie (made by Ranger), they work a treat!